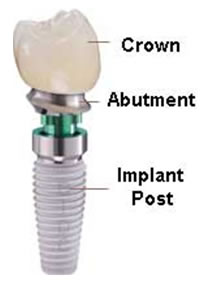 There are 3 parts to a dental implant. First is the implant body or post which is a titanium screw that is surgically inserted into the jaw bone. This replaces the root of the missing tooth. Once the implant is placed into the bone, it is either left to heal under the gums for 3-6 months or it may be used right away.

Impressions are then taken for the making of a crown, which when made is cemented onto the abutment.

This patient was referred to us as her existing bridge had failed and needed removal. The teeth supporting the bridge had become infected and could not be saved. She made it clear that she did not want to wear a denture. The infected teeth were removed and replaced with implants. These implants were then used to support a bridge.  The adjacent broken down natural teeth were refined to receive crowns thereby protecting them. This helped to correct the bite which will be beneficial to not only the teeth but to the supporting tissues and the jaws too.

This patient was referred to us for replacement of a lost lower front tooth. She was unable to wear a removable denture as it would not stay in its place and was unsightly. She wanted a fixed option.
A conventional bridge –as shown in Picture A, would have involved reducing the healthy adjacent teeth in size, to accommodate a bridge, to replace the missing tooth.

The patient was not keen to have sound and healthy teeth to be ground down. This meant the only and probably the better option for her was to replace the missing tooth with an implant supported crown/tooth, which did not need the support of the adjacent teeth. This was an independent real tooth like situation. 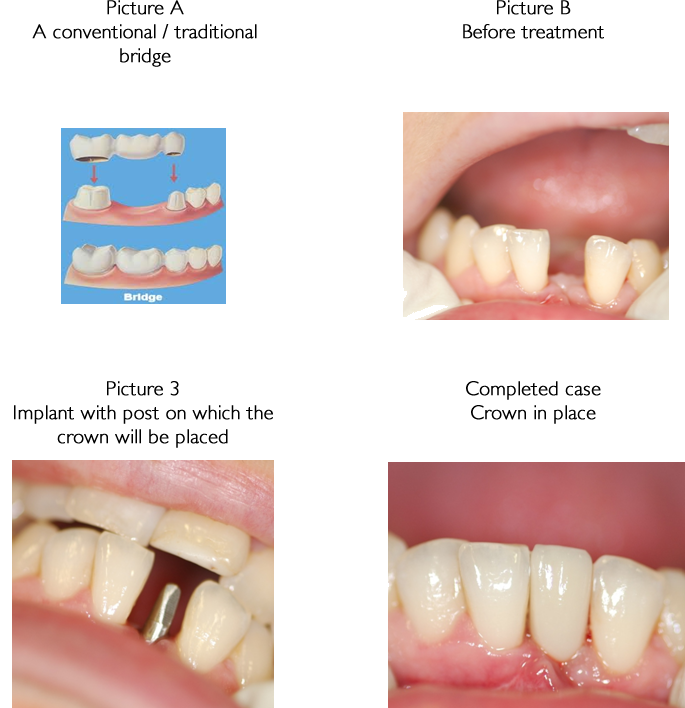 This 50 year old gentlemen lost his 3 front teeth. He tried wearing a denture for a while but could not cope with the removable plastic denture. We discussed different options varying between replacing the missing teeth with a traditional bridge versus an Implant supported bridge.  He decided to go for 2 implants which would support the 3 missing teeth.

Since there was significant bone and gum shrinkage following the loss of the teeth a discussion took place as to how best the lost gums would be restored.  2 Implants were placed -one in the of upper right central incisor position and the second in the canine area.

Picture A shows the 2 implants with corresponding posts ready to receive a bridge.

Picture B shows the bridge in place and the crucial lost gums being simulated by porcelain, thereby recreating the lost gums.

This patient fractured her upper right lateral incisor and wanted an immediate solution for the broken tooth.

The remaining root stump was removed and an implant placed straightaway. The procedure was completed by placing a natural looking crown over the implant post.

This 40 year old gentleman had a very loose upper right lateral incisor. The tooth had advanced gum disease which had eaten away the bone holding the tooth. He wanted a good long term solution. He did not fancy wearing a removal denture.

A traditional fixed bridge was out of question as his adjacent teeth were not strong enough to hold the bridge.  An implant was the only choice. The tooth was extracted and replaced with an implant supported tooth. 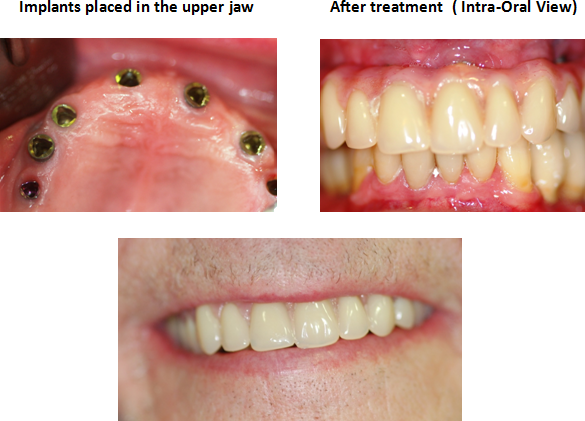 We accept referrals for:

Are you a new patient?
Download our new patient self-referral form (pdf)

Thanks! Your email was successfully sent.

There was an error sending your message. Please try again later.